Share
Facebook Twitter LinkedIn Tumblr Pinterest Reddit WhatsApp Telegram Viber Share via Email
–>
A collection of 45 ancient Egyptian tombs was discovered last week by an Egyptian mission of the Supreme Council of Antiquities (SCA) at the site of Lahoun, in the Fayoum.
Culture minister, Farouk Hosni, announced today that each tomb contains a painted wooden sarcophagus with the mummy of the deceased still inside it.
Dr. Zahi Hawass, Secretary General of the SCA, explained that during the excavation work, the mission unearthed an 18th dynasty tomb (1550-1295 BC) containing 12 wooden sarcophagi stacked on top of each other. Each sarcophagus contains a well-preserved mummy. The mummies are covered in cartonnage, which is decorated with religious texts from the Book of the Dead and scenes featuring different ancient Egyptian deities.
The mission also discovered four cemeteries; the first is dated to the first and second dynasties (ca. 2750-2649 BC), the second belongs to the Middle Kingdom (2030-1660 BC) while the third and fourth are dated to the New Kingdom (1550-1070 BC) and The Late Period (724-343 BC).
Dr. Abdel Rahman El-Aydi, head of the archaeological mission, pointed out that the first and second dynasties cemeteries are composed of 14 tombs. One of the tombs is almost completely intact, including all of its funerary equipment and a wooden sarcophagus with a mummy wrapped with linen.
The Middle New Kingdoms cemetery contains 31 tombs most of which are dated to the 11th and 12th dynasties (2030-1840 BC). Each tomb includes a painted wooden sarcophagus bearing a mummy covered with cartonnage, decorated with religious texts that help the deceased to cross through the underworld, as well as scenes of different ancient Egyptian deities, such as Horus, Hathor, Khnum and Amun.
Also, at the four corners of king Senwosret II’s temple, the mission has located four shafts filled with a large collection of clay vessels.
Last year, the mission found 53 stone tombs from the Middle and New Kingdom, as well as the Late Period and the Roman era. 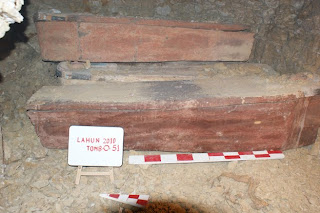 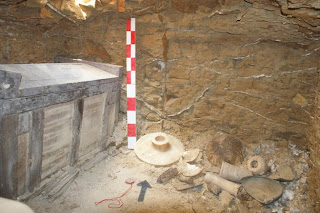 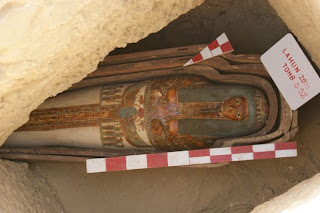 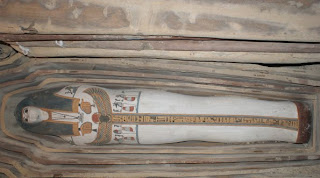