Share
Facebook Twitter LinkedIn Tumblr Pinterest Reddit WhatsApp Telegram Viber Share via Email
The following news will be announced at the international press conference will be held by
Dr. Zahi Hawass in sakkara on Thursday 8th July at 9am.
Cultural Minister Farouk Hosni announced that the Egyptian mission working at Sakkara has found two tombs dated back to the Old Kingdom.
Dr.Zahi Hawass (the head of the mission) declared that the mission has found in the area known as Gesr Almoudir, west of the step pyramid in Sakkara, two tombs belongs to a father and son. 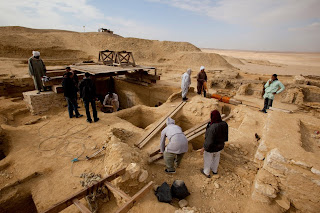 –>
The first tomb of the father called “Shendwa” where a magnificent false door was found with colours still intact. A depiction of the deceased in front of offering table is on the door besides his name and titles that shows that he was the chief of scribes, overseer of missions besides plenty of honorary titles during the 6th dynasty (2374-2191 B.C). The burial shaft is located 20 meters deep under the false door. 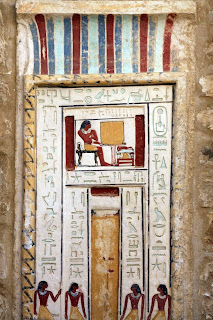 –>
“When I managed to get to the shaft I have found that it was intact as it was difficult to get to and even tomb robbers couldn’t get to it.” Said Dr. Zahi Hawass 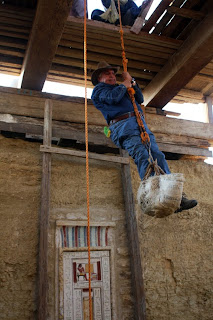 Although the wooden coffin of “Shendwa” was found disintegrated due to moisture, 5 limestone pottery in a shape of a duck were found next to the coffin contains duck’s bones.
Hawass said “the most important thing was found down the shaft was a limestone obelisk about 30cm long as Ancient Egyptians used to erect small obelisks in front of the old Kingdom tombs as it is a symbol of the god of the sun, Re
Next to the tomb and on the same level of the false door the mission has found another tomb of the son of “Shendwa” who is called “Khenso”. Khenso held the same titles as his father. Inside the tomb some of the most beautiful depicted scenes of the Old Kingdom of the deceased in different shapes.

Londoners to feel at home in Cairo more and more!!!