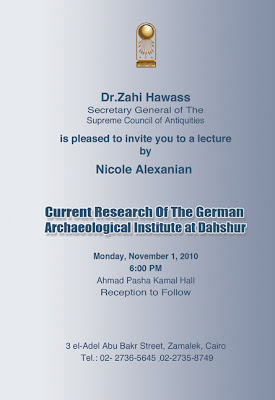 The Mission of the German Archeological Institute, Cairo has been recently concentrating on the area of the Lower Temple of the Bent Pyramid and that located to the west of Amenemhat II’s pyramid at Dahshur. In 2008, magnetometric measurements and borings have revealed the lower causeway that leads to the Lower Temple of the Bent Pyramid. Excavation trenches conducted in 2009 and 2010 uncovered a sledge way containing considerable number of relief fragments originally belonging to the Lower Temple. On a deeper level, two massive lateral mud brick covered with a mud brick vault were discovered.
In the area to the west of the Pyramid of Amenemhat II, the German Mission has uncovered a cemetery. Burial shafts in this cemetery are laid out in rows running parallel to the enclosure wall of the Pyramid Complex of Amenemhat II. This indicates that the cemetery was planned and executed in direct relation to the Pyramid Complex. Those shaft-tombs most probably belong to officials from the court of King Amenemhat II. Interestingly, the layout of this Middle Kingdom cemetery seems to be inspired by much earlier prototypes.