Dr. Zahi said that statue is a unique one made of coloured limestone depicting King Akhnaton wearing a crown of blue faience holding an offering. The statue measured 7 cm on an alabaster base. 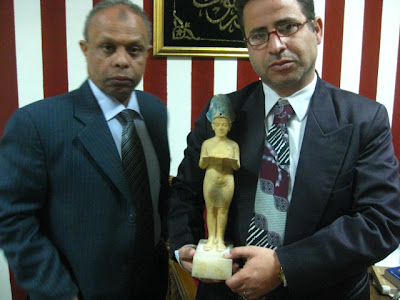 The story behind returning it back goes as follows, during the demonstrations in Tahris Square a 16-year old who was amongst the protesters found it on the ground next to a rubbish bin so he took it home with him and when his mother saw it so she called her brother who is Dr. Sabry Abd el Rahman (Professor at the American University in Cairo) who recognised the statue and called the ministry of Antiquities to hand it in knowing its importance and appreciating it as a part of the Egyptian national heritage that all Egyptians respect and protect.

A committee headed by Dr. Yousef Khalifa (Head of the stolen artifacts in the ministry) received the statue at the Tourism and Antiquities Police headquarters in downtown Cairo after verifying it was genuine and it is the missing statue. 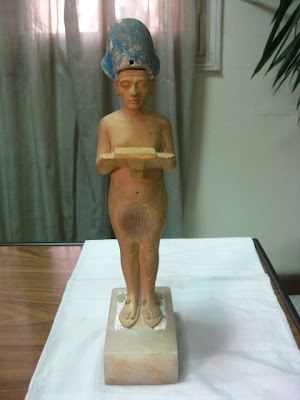 The statue itself is considered unique Amarna’s art style as Dr. Tarek (The Egyptian Museum curator) and he added “the statue will be restored before it is back on display”

With this statue so there are 4 back out of 8 objects were stolen from the museum on 28th January.

The Latest about the Egyptian Museum robbery. CNN is wrong