After Dr. Zahi Hawass announced the robbery of 8 statues from the Egyptian Museum, 4 of them were found (you can check our previous posts) but also many reports of statues found and when a committee was formed to check the statues, it appeared to be fake including a 150 kilo grams statue was found by the Nile bank in Cairo (not far from the museum). One of the approved genuine statues was found by one of the protesters (16 year-old student) on the ground by a rubbish bin (Full story here) and the statue was handed to the Ministry of Antiquities.
So far that’s what should be done in such a situation but on Friday 25th February the daily most respected and known newspaper (Al-Ahram) on the last page there was a bit of news about a young engineer who work for a petroleum company who was one of the protesters at Tahrir Square near the Egyptian Museum and he found a statue on the ground and to protect it, he took it home and next day he consulted his boss at work about what to do with the statue and for 3 weeks of not knowing what to do. Then he got advised to hand the statue to the newspaper which he did and he said he feels it is safe now. 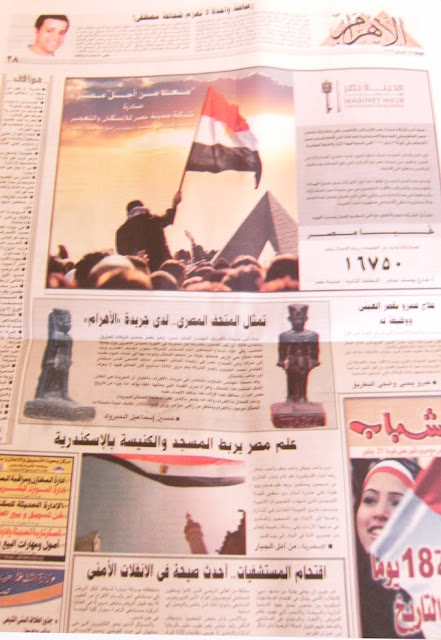 The editor also mentioned that the statue is in the newspaper headquarters and they will wait Dr. Zahi Hawass to form a committee to go and receive it.

"Damaged or Not?" Ramses II statue at Grand Egyptian Museum