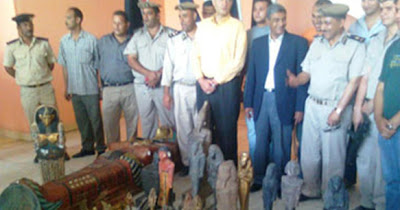 55 antiquity objects of various sizes including 2 sarcophagi dated back to different eras were seized by a police force on a raid on a known criminal’s residence in El Wadi El Gadid. The raid on Mohamed A.A. – 37 years old, residence resulted finding the mentioned antiquities plus police uniforms which led to believe they were stolen during the recent turmoil.
Mohamed A.A. is a fugitive and the police are looking for him.
First official comment on this incident came from Dr. Atef Abo El dahab who said that all the seized objects are not genuine according to the Antiquities Police primary report. Dr. Atef added “A committee will go tomorrow to check the genuinity of the objects”