This morning Dr. Zahi Hawass held a press conference at the site to announce the beginning of the stone cover removal in order to begin the restoration project of the solar boat. 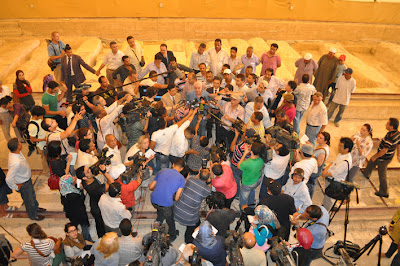 To the west of the first solar boat at Giza, the second solar boat was detected by an electromagnetic radar in 1987 and since 2008 it has been the issue of research by the Egyptian Ministry of State for Antiquities (formally Supreme council of Antiquities) in co-operation with a delegation from Waseda University and the Japanese Institute for Restoration Research.

Zahi Hawass said today “This project will take 5 years where 13 layers of wood will be transferred to the site to start the restoration process after doing the necessary tests on the 4300 years old wood. A new museum will be built for the second solar boat at the new entrance for the Giza plateau area.” 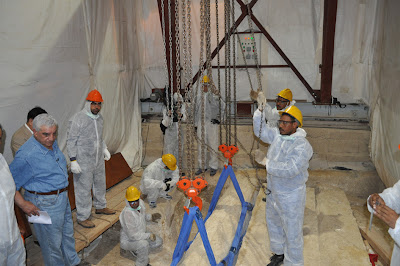 Dr. Zahi Hawass also said that during the cleaning of the stone filling of the solar boat, a Cartouche was found bearing the name of King Khufu and beside it his son’s name but without a cartouche. This is considered the second finding of its kind as the King cartouche was found before in the 5 rooms inside the great pyramid which may be a prove that the second solar boat was constructed in this location before the other boat which in its museum by the great pyramid. 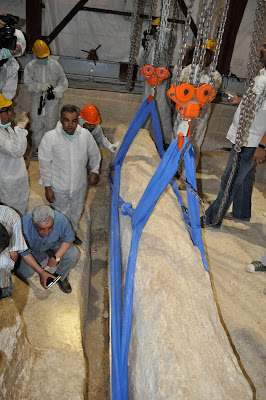 Although today the first stone cover removal but there are 41 stones to be removed measure 4 meters length by one meter width and the heaviest weighs 16 tons. After removing the stones, the hole will be covered by chemically treated wood boards which are filled with a thermal insulation in order to maintain the heat and moisture in the pit at a safe level. 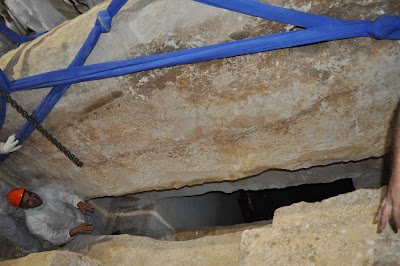 On a different subject; Zahi Hawass said that all of Egypt’s historical sites are safe and secured and he saw about 2000 tourists visiting the pyramids and the sphinx this morning
This work may help to reveal more historical information about King Khufu.

Stolen in 1990 and auctioned in London ... Another artefact is back in Egypt