“Dr. Maria Carmela Gatto (Director of Aswan-Kom Ombo Archarological Project) made a discovery at Nag el-Hamdulab site(North west of Aswan) of the oldest graffiti shows a King wearing the Upper Egypt headgear(crown) with a group of royal scenes dated back to dynasty zero.” Said Dr. Zahi Hawass. “The find shows many hieroglyphic graffiti and the first drawings shows a complete royal celebration looks exactly like what was known in the different Pharanoic eras, showing the Pharaoh wearing his white crown accompanied by Horus followers or the royal court.”Hawass added. 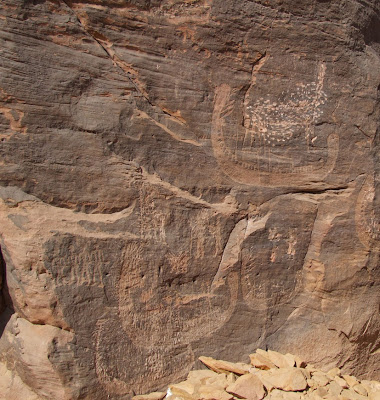 Dr. Maria Carmela said “This discovery is considered an update or completing the work on the site which was discovered by Dr. Labib Habashi on the west bank on the Nile north of Aswan at Nag El Hamdulab. The new study shows that the site dated back to dynasty Zero which is the same of tomb of Narmer (2960-2770 B.C).
The significance of this discovery is the uniqueness of the rock art of the pre-dynastic era represents a procession of boats superintended by the King who is accompanied by 2 standard bearers, one fan bearer and a dog.” 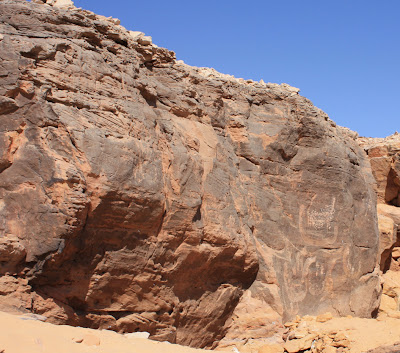 There is a remarkable similarities could be obviously noticed between Nag El Hamdulab tableaux and the Scorpion mace-head, Narmer mace-head and Narmer palette as the scene shows a man with a bow repress a man held captive lying on the ground. The tableaux was restored by the mission after a severe damage using the original photographs by Dr. Labib Habashi which were kept at the Oriental Institute at Chicago University.

For more about Dr.Maria Gatto, her notes and her work …. Check Here and Here

The First Roman Basilica to be discovered in Alexandria