Share
Facebook Twitter LinkedIn Tumblr Pinterest Reddit WhatsApp Telegram Viber Share via Email
The Ministry of State for Antiquities (MSA) along with the U.S. Agency for International Development (USAID) kicked-off a new groundwater lowering project at Temple Edfu in a workshop held today in Cairo.  The project will construct a drainage system to lower the groundwater level that threatens antiquities in the Edfu Temple and will be carried out over approximately 20 months. 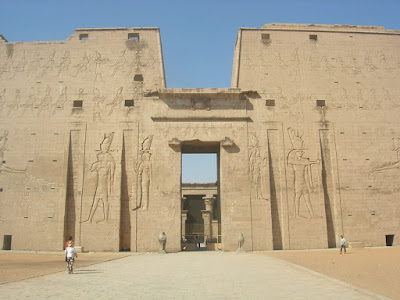 The Secretary General of the Supreme Council of Antiquities, Dr. Mostafa Amin, will attend the Workshop, which has been convened to allow the partners to identify critical factors for project success, prepare action plans, and confirm roles and responsibilities for the project’s implementation.  John Pasch, Acting Productive Sector Development Office Director, will represent USAID at the workshop.
“The Egyptian government and USAID have a solid history of successful collaboration to preserve Egypt’s antiquities,” remarked USAID Mission Director Walter North.  “We look forward to the same cooperation for Temple Edfu.”
The Government of Egypt and USAID worked together previously on a similar project in Luxor’s East and West Banks where important archeological treasures such as Karnak and Luxor temples, Medinet Habu, the Colossi of Memnon, Amenthotep III, Ramesseum, and Seti I were saved from eventual destruction due to rising groundwater levels.  In addition, a groundwater lowering project is currently being implemented for the Pyramids Plateau which is expected to be completed in April 2012.
Since 1993, USAID has provided more than $100 million to support more than 70 antiquities conservation and training projects in partnership with the Government of Egypt.

New discovery in the Valley of the Kings