Share
Facebook Twitter LinkedIn Tumblr Pinterest Reddit WhatsApp Telegram Viber Share via Email
Dr. Mohamed Ibrahhim, Minister State of Antiquities, inviting the people of Japan to visit Egypt and demanding the Japanese government to lift the ban on Japanese nationals travel to Egypt, during the international press conference which was held at Tampozan Gallery in Osaka,Japan.
Dr. Ibrahim wanted to send a message that Egypt is safe and welcoming visitors from all over the world. 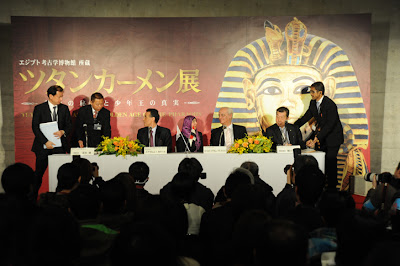 Dr. Mohamed Ibrahim’s first official visit to Japan of an Egyptian cabinet member since the revolution and beside the main event which is the “Tutankhamon and the Golden Age of the Pharaohs” exhibition, The Egyptian minister announced that EgyptAir flights to/from Japan will start again as of early April as a positive step from the Egyptian government to encourage Japanese tourists to visit Egypt. 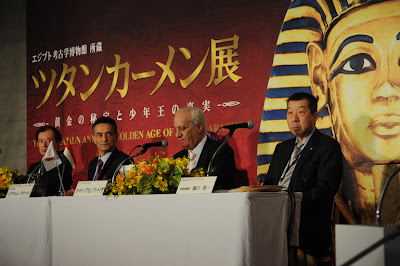 Dr. Mohamed Ibrahim also plans to discuss continuing the procedures of the Japanese grant of 300 million dollars offered by JICA (Japan International Cooperation Agency) to complete the construction of the Grand Egyptian Museum overlooking Giza plateau.
Adel Abd Elsatar, head of the Museums Department, said that the exhibition includes 122 artefacts carefully selected from the Egyptian Museum in Tahrir, 50 of them from the collection of King Tutankhamon after returning 9 objects last months from King tut collection to Egypt.
The exhibits include the golden coffin of King Tutankhamon, boxes engraved with battle fields and hunting sceneries, various pieces of jewellery inlaid with semi-precious stones, battle kits such as swords and daggers, as well as Tutankhamon’s throne, and a golden shield which was designed to protect the king during and after his death. 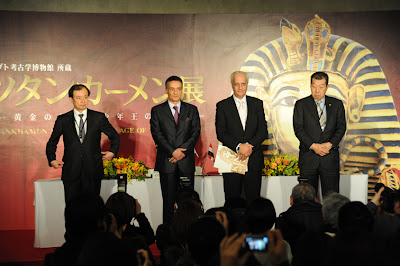 Since its beginning in 2002, the exhibition has travelled to Switzerland, Germany, United States (3 years) , France, England, the United States again and Australia. 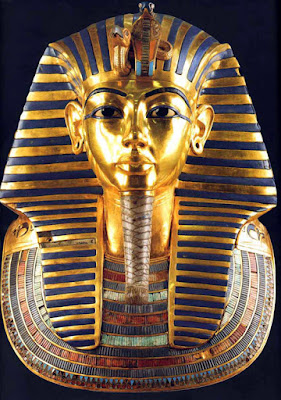 U.S. Ambassador Visits the National Archives of Egypt on response to Institut d’Egypte Call for Support to Salvage Damaged Books