Share
Facebook Twitter LinkedIn Tumblr Pinterest Reddit WhatsApp Telegram Viber Share via Email
The U.S. Ambassador to Egypt, Anne W. Patterson and Mr. Walter North, Director of the U.S. Agency for International Development (USAID) along with Mr. William Kopycky, Director of the Library of Congress in Egypt and Jane Smyth from the American Center for Research in Egypt (ARCE) visited the National Archives of Egypt, where they were welcomed by Dar el Kutob’s chairman Dr. Zain Abdel Hady. 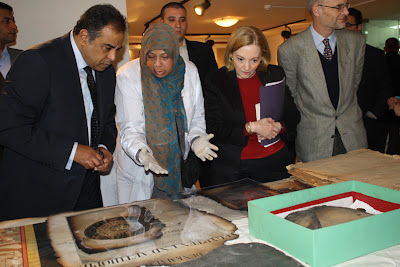 Dr. Abdel Hady led the delegation on a tour of the conservation labs where the books salvaged from the recent tragic fire at the Institut d’Egypte are being restored.  The tour also featured a visit to the Digital Archives Center which was established through assistance provided by the U.S. Library of Congress.
“The fire caused a tragic loss to Egypt’s and the world’s intellectual heritage,” said U.S. Ambassador Anne Patterson.   “The United States is gratified to be able to support the effort to recover this incredible collection.”
The U.S. Agency for International Development and the American Center for Research in Egypt promptly responded to urgent needs expressed by the Egyptian Ministry of Culture’s Dar el Kutob for assistance.  USAID provided the funding for critical equipment and supplies to carry out this critical conservation mission. The U.S. Library of Congress will be offering technical assistance to help preserve the books and catalogue them once they have been salvaged.  The Library of Congress has also been working closely with Dar el Kutob on the World Digital Library project to make rare cultural treasures more accessible to a global audience via the Internet.
The Institut d’Egypte was founded by Napoleon Bonaparte in 1798 and became a center for research and scholarship about Egypt, producing the well-known “Description of Egypt.”  It was recognized as the oldest functioning academy of sciences and arts outside Europe.  The collection consists of rare books and manuscripts, some of which date back to the 14th century.

The Minister State of Antiquities visits the Egyptian Museum in Tahrir