Share
Facebook Twitter LinkedIn Tumblr Pinterest Reddit WhatsApp Telegram Viber Share via Email
This morning Dr. Mostafa Amin (Secretary General of the SCA) and on behalf of Dr. Mohamed Ibrahim (Minister State of Antiquities) held an international press conference at the site to announce the beginning of the third stage of the restoration project of Khufu’s second solar boat. 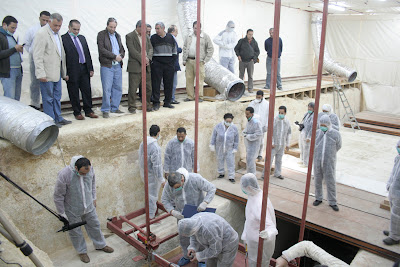 To the west of the first solar boat at Giza, the second solar boat was detected by electromagnetic radar in 1987 and since 2008 it has been the issue of research by the Egyptian Ministry of State for Antiquities in co-operation with a delegation from Waseda University and the Japanese Institute for Restoration Research. 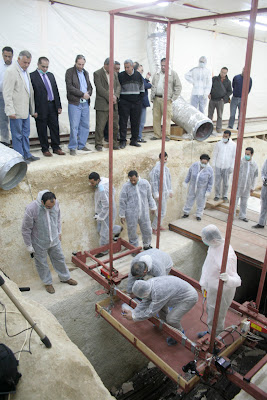 Dr. Mostafa Amin said that the team would collect samples of the boat’s wooden beams for analysis in Egypt and Japan in order to draw up accurate plans for the boat’s restoration in situ.
Mr. Oshimora, Head of Waseda University Team said “The project started in 1992 and the problem we are facing is the condition of the wood as it needs special and delicate treatment before the restoration process and we will take sample of about 60 wooden pieces out of 600 pieces was found in the pit.” He added “The wood processing would take 2 years and the restoration and reconstruction of the boat should finish in 5 years and we hope that the political situation in Egypt will be stable so we could complete this project with no delays.”
The first press conference held at the site was in June 2011 by Dr. Zahi Hawass (More Details: Here)