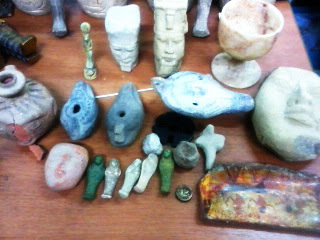 Dr. Mohamed Ibrahim (Minister State of Antiquities) said that the objects were in acquisition of a British couple (Michael R. and Angela N.) who was trying to leave the country and that the objects will be transferred to the Egyptian Museum storerooms in the next few days under the supervision of a specialized committee.
The objects include a pottery pot on 9cm with a human face depicted, 5 pottery and green faience ushabti with hieroglyphic inscriptions and depiction of Isis which are dated to late pharaonic times. The objects are protects and fall under the antiquities law No. 117 for 1983 and the Bible is subject of culture property which is protected by law 114/1983.
Mr. Hassan Rasmi (Head of the central administration of ports) said that during the Committee examination of the seized artifacts, the wife did throw and broke 3 lanterns trying to destroy the objects and the police force managed to control her.

We demand an official apology