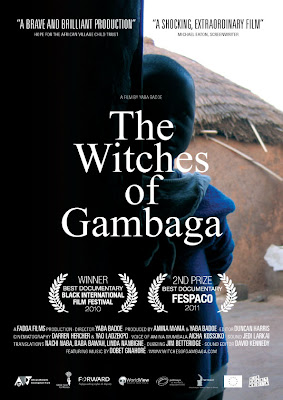 The Witches of Gambaga is a haunting 55 minute documentary film about a community of women condemned to live as witches in Northern Ghana. Made over the course of 5 years, this disturbing expose is the product of a collaboration between members of the 100 strong community of ‘witches’, local women’s movement activists and feminist researchers, united by their interest in ending abusive practices and improving women’s lives in Africa. Painful experience and insight combine to generate a uniquely intimate record of the lives of women ostracized from their communities.Told largely by the women themselves, their incredible stories and struggles are rendered comprehensible to a wide range of audiences by the director’s narration. Completed in July 2010, Fadoa Films Ghana and UK, Directed by Yaba Badoe, Co-produced by Yaba Badoe and Amina Mama.
Winner, 2010 Black International Film Festival Best Documentary Award
REVIEWS of The Witches of Gambaga
“An excellent exploration of how women are victimized …a valuable resource for understanding
how to end this problem.”
Cornelius Moore, California Newsreel
“An admirably unsensational but powerfully affecting reminder of the terrible influence still wrought
by superstition on the lives of so many women.”
Geoff Andrew, film critic, British Film Institute
“A brave and brilliant production”
Hope for the African Village Child Trust
“…will go a long way to promote the rights of women…”
African Women’s Development Fund
“ A shocking, extraordinary film..”
Michael Eaton, screenwriter
“… the unacceptable and abusive treatment of women as witches is exposed…”
ABANTU FOR DEVELOPMENT
Below is a link to the trailer of the film on Youtube
http://www.youtube.com/watch?v=iFhHX7CJSes
Click to see a 10 minute version of the film on the Guardian’s website:
http://www.guardian.co.uk/global-development/video/2010/nov/25/witches-gambaga-ghana
The film website at:
http://www.witchesofgambaga.com

We demand an official apology