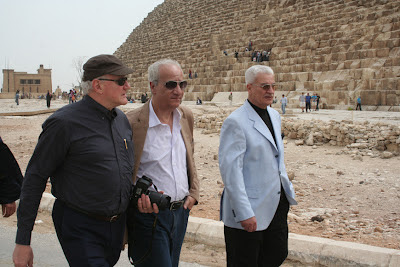 After restoration and development for the site of the cemetery where 6 tombs of high officials and Nobles at the Saqqara Necropolis fated back to the Old Kingdom, Dr. Mohamed Ibrahim (minister State of Antiquities) accompanied by UNESCO delegation headed by Francesco Bandarin (UNESCO Assistant Director-General for Culture) visited the site and announced that the 6 tombs will be open for public soon. The cemetery which contains the tombs of “Seshemnefer” of 6th dynasty who held the title of “Secretary of all the king’s secret orders” and Queen Meresankh III, the granddaughter of Khufu and the wife of King Khafre (Her tomb was discovered by archeologist George Reisner on April 23, 1927, with subsequent excavations undertaken by his team on behalf of Harvard University and the Museum of Fine Arts, Boston. Her sarcophagus and mummy are now located in the Egyptian Museum in Cairo.) 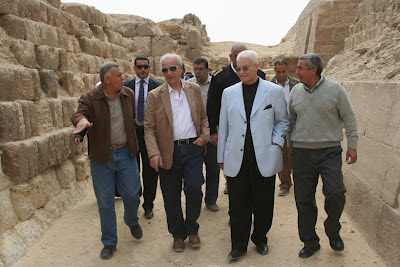 Ali El Asfar explained that the opening of those tombs for public in the frame work of the development and restoration project in the area by opening tombs and closing others for restoration and he referred to closing 6 other tombs including Senn Nefer Ra.
The Minister said that these tombs were closed for nearly 25 years and will be reopened after the restoration work which included reinforcing the walls, reinstalling some blocks back in the tombs and installing a lighting system. Also Dr. Mohamed Ibrahim added that metal and wooden gates were installed at every tomb to strengthen security in entryways and new stone slabs outside of the tombs mark the path clearly through the necropolis.
Dr. Francesco Bandarin expressed his care to visit Egypt to check the World Heritage sites after January 25th revolution and provide technical support to the officials to protect the Egyptian heritage and he added that it is understandable the difficulty of the situation and challenges in the light of the general situation in the country after the revolution; emphasizing the spirit of cooperation by the organization and Ms. Yukova Director-General and the Egyptian officials to preserve the heritage of the Egyptian civilization.