Share
Facebook Twitter LinkedIn Tumblr Pinterest Reddit WhatsApp Telegram Viber Share via Email
A colossal statue of Amenhotep III in quartzite newly raised in the funerary temple of the King on west bank, Luxor.
A colossal statue of Amenhotep III in quartzite has been raised at its original place by the members of “The Colossi of Memnon and Amenhotep III temple conservation project”, an Egyptian-European team working for the conservation of the funerary temple of Amenhotep III in Luxor since 1998.
The colossus represents Amenhotep III seated on a decorated throne, and accompanied by a beautiful and very well preserved statue of Queen Tiye standing near the right leg of the King.
The colossus was found lying within the ruins of the funerary temple of Amenhotep III. It is the Northern one of a pair of royal colossi in quartzite once stood at the gate of the second pylon of the temple, 100 meters behind the famous Memnon Colossi which represent the same King at the entrance of his prestigious temple.
The temple was destroyed by a very heavy earthquake around 1200 BC, and the two colossi had collapsed and remained broken in front of the second pylon.
The North colossus was half buried under Nile alluvia and was surrounded by the project since 2002, lifted 3.90 meters out of the muddy and salty water layer in 2004, and transported 9.5 meters on solid ground for study and conservation, in 2005, after its foundation was consolidated with armed cement, the colossus was brought back near its pedestal in 2011. The raising operation started on 6th February 2012, and was successfully achieved on 13th February.
After that first step of the operation, the right foot of the King resting on a decorated base and other blocks belong to this base were placed on the pedestal.
The knee, the chest and the head will be joined to the colossus in the forthcoming season.
The colossus is a masterpiece of Ancient Egyptian royal sculpture, hewn in a very hard block of quartzite which was transported from the quarries of Gebel El-Ahmar in Cairo. It is extremely well sculpted and smoothly polished.
This is the first time that such a monumental sculpture is raised by methods combining the Pharaonic ways and modern technique of lifting with air-cushions.
In spring 2013, the team will also lift at its original location the lower part of the south colossus, which was unknown and lay completely buried under the ground of the temple. It was discovered by the project director in 2003 and was treated by the conservation team. 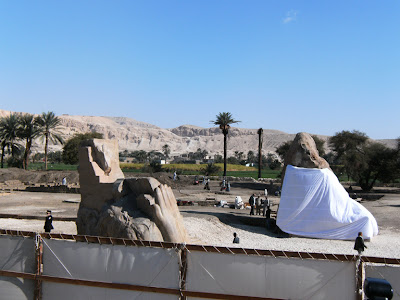 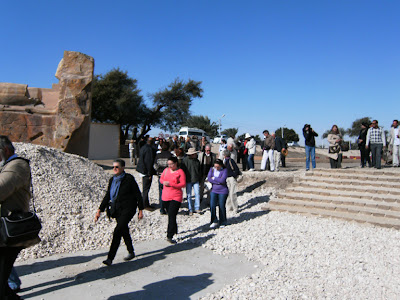 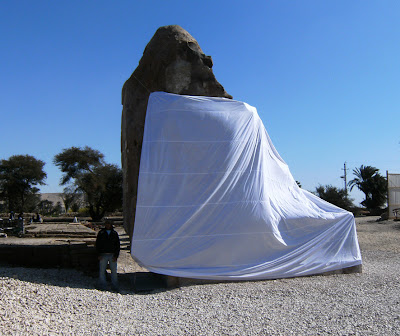 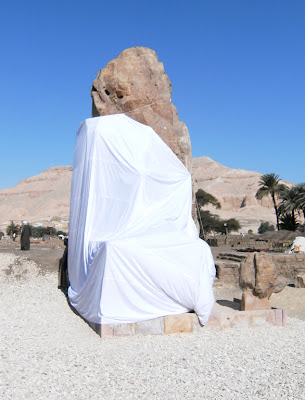 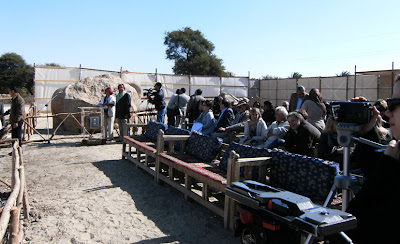 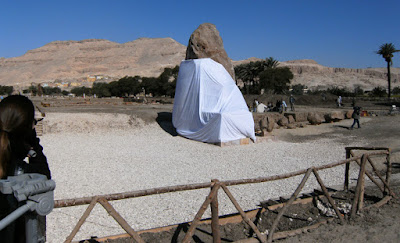 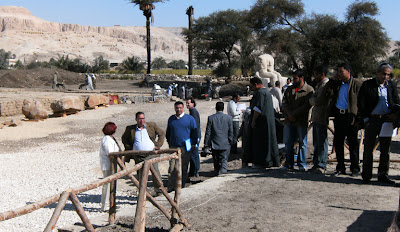 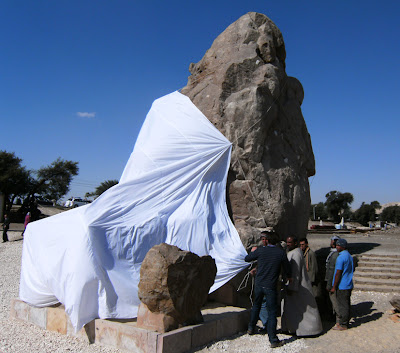 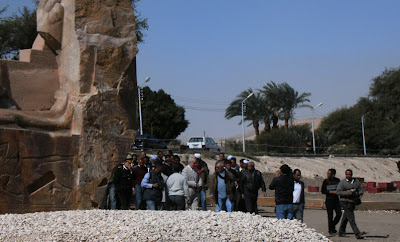 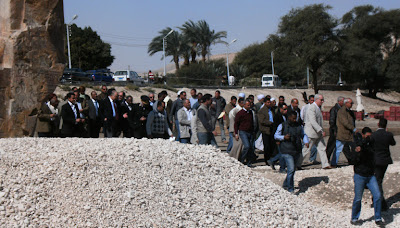 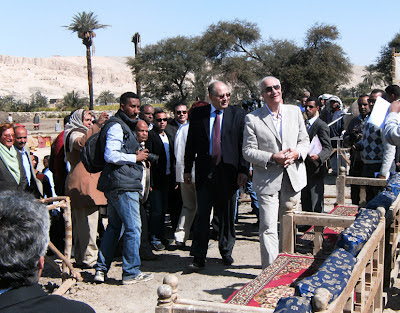 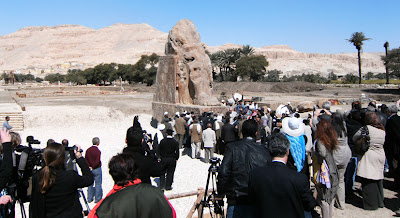 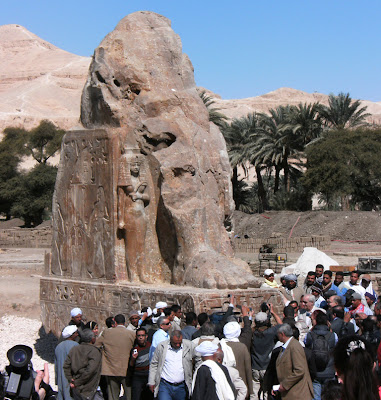 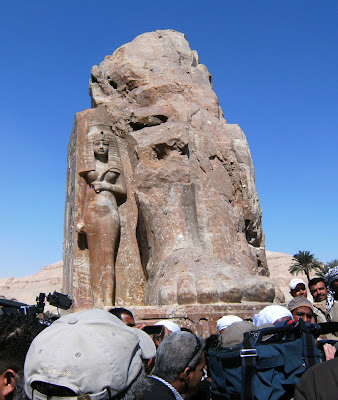 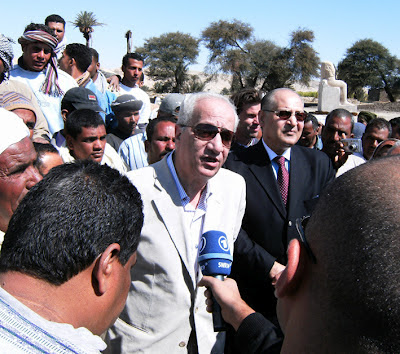 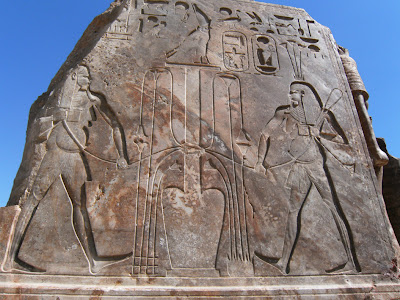 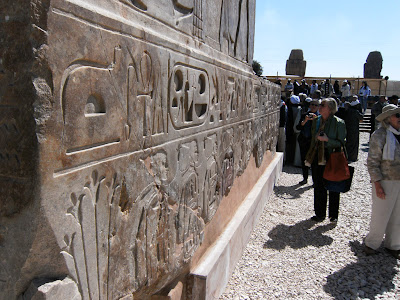 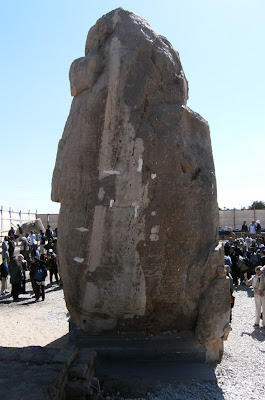 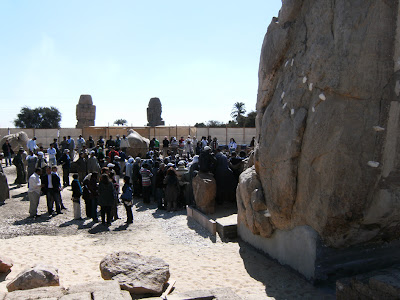 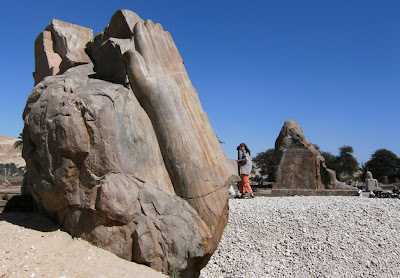 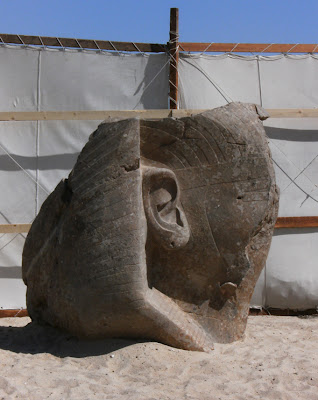 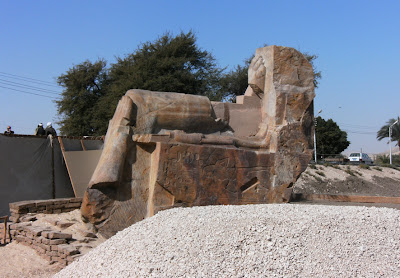 A New Pharaoh was discovered, The Royal name of the 17th Dynasty at Karnak Temple