Share
Facebook Twitter LinkedIn Tumblr Pinterest Reddit WhatsApp Telegram Viber Share via Email
Dr. Mohamed Ibrahim announced that two golden coins were found in Kom El-Ghoraf in Mahmodia, Behira governorate in Delta. The coins were found by Rome University mission headed by Dr. Loredana Sist. The coins are dated back to Byzantian era and they are important ti give a clear image of coins in that period as well as show the accuracy in making them at that time.
The first coin weighs 4.300 grams and measures 2.1 cm diameter and 1 millimeter thickness. One side bear a depiction of the Byzantine Emperor Phocas (23 November 602 –
4 October 610 A.D) holding a cross and written above it the Emperor name and on the other side a depiction of the Emperor holding a stick in his right hand and a cross in the left hand and written above “Victoria” 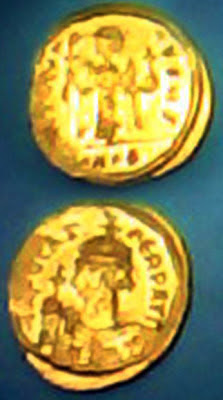 The second coin diameter weighs 4.270 grams and measures 1.9 cm diameter and 1 millimeter thickness. One side bear a depiction of the Byzantine Emperor Heraclius (5 October 610 –
11 February 641A.D) with his son Constantine III on his right and his other son Heraklonas on his left. On the other side of the coin there is a depiction of a cross erected above few steps. 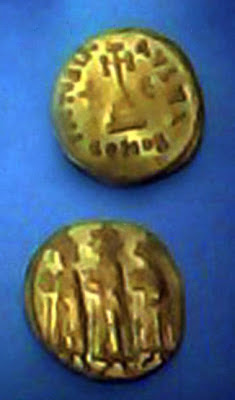 The tickets prices increase is postponed till July 2013