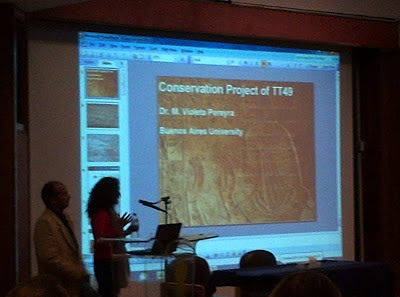 The lecture was held at the Mummification Museum on Sunday 27th January and attended by 129 persons.
Dr. Violeta started by an introduction on the site history. The tomb in el-Khokha area and when the mission first introduced to the site by Mr. Ibrahim Soliman in 1999, the tombs was in the middle of the village and surrounded by houses.
The site was excavated by the Metropolitan Museum mission between 1920-1929.
Neferhotep who was a high official of Karnak and held the titles “Chief Scribe of Amun”. Neferhotep was a contemporary of Tut Ankh Amun.
The tomb of Neferhotep (TT49) is a monument which corresponds to a very important transition period in Egyptian history and its relevance is that testifies to that process. Chronologically is located in the immediate moment after Akhenaten’s reform and the restoration of the hegemony of Thebes. In that process Neferhotep family must have stayed loyal to the opponents of reform and then was revived in a prominent position. So in his tomb represented the temple of Karnak. Their god (Amun) was the chief of the imperial state and the dynasty, and the Temple of Karnak was the most powerful institution in Egypt both economically and politically at the time of opulence for Egypt.
The tomb’s entrance leads into a hall which connects via a doorway to a pillared hall which contains four pillars. At the back of the pillared hall a niche contains seated statues of Neferhotep and his wife Iuy.
TT49 Conservation project is multidisciplinary and integrated approaches of historical and archaeological monument.
When Dr. Violeta started in 1999; the mission plan was to excavate the hall, chapel and passage. Also tests in the sloping passage and funerary chamber beside the excavation of the ‘ Usurped ‘ burial.
After the houses were cleared, the mission started in 2006 working on cleaning the entrance and the courtyard with a very important point according to Dr. Violeta which is not to make a big intervention.
Another phase of the project is the survey of iconography which will be published in Spanish. 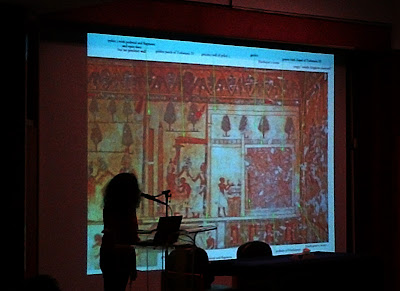 Deterioration phenomena
– Crumbled rock / fractured rock.
– Lost part of stone decoration.
– Consolidation of wall paintings
– Stabilization of borders of the plaster.
– Filling lost parts of well paintings.
The most interesting part of the conservation work was done by the German conservative group associated with the project implemented a methodology that brought up the visibility of the wall paintings and reliefs, which were hidden by a thick layer of soot, using a combination of mechanical, chemical and laser technology, the latter applied for the first time in this type of monument and with excellent results.
.