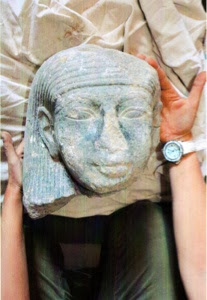 The Minister said that the first look on the details of discovered statue head shows that it is likely belongs to a statue of a king followed the reign of Thutmosis III but to determine for sure, it would require more study.
Mohamed Abd Al Maqsoud, head of the Egyptian Antiquities department said the head was discovered in the trench at the northern side of the second courtyard of the funerary temple.
He added “the head shows with a wig, round face and 8 cm long ears. Nose and chin are broken but part of the neck is still there.”

Wooden sarcophagi and other antiquities to be repatriated from the USA

Egyptian heritage is under maximum security