Share
Facebook Twitter LinkedIn Tumblr Pinterest Reddit WhatsApp Telegram Viber Share via Email
Today, U.S. Embassy Chargé d’Affaires Marc Sievers toured the Museum of Islamic Art and Dar al-Kutub to see firsthand the damage resulting from the January 24 bomb attack in Bab al Khalq.  He announced a LE 1 million grant from the U.S. Government to assist with urgent needs in the early recovery phase.
“The United States is committed to its long partnership with the Egyptian people, and we are honored to contribute to the protection and salvage of this rare collection of art,” said Chargé d’Affaires Marc Sievers.  “There is absolutely no excuse for the kind of horrible terrorist attack like the one on January 24 that caused the damage that I saw today.   We stand together with Egypt in condemning this attack.” 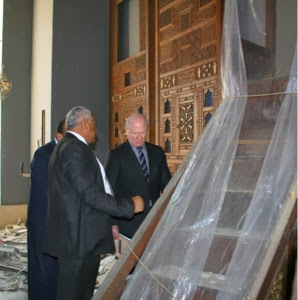 The U.S. Agency for International Development (USAID) and the American Research Center in Egypt (ARCE) will coordinate closely with Egyptian institutions to help restore the site.  The United States and ARCE have partnered since 1948 with Egyptian historians, archaeologists, and conservators to preserve Egypt’s antiquities for future generations through documentation, conservation, and training.
In response to the earthquake in 1992, ARCE partnered with USAID to administer grants that promoted the conservation and preservation of Egyptian antiquities.  In 2012 they partnered to provide immediate assistance to repair the damage to the rare book collection of the Institut d’Egypte in coordination with Dar al-Kutub.  In 2013, they helped to restore temples at Mut, Deir el Shelwit, and Qurna in Luxor – and as part of the process, created over 800 full-time jobs for Egyptians in cleanup, conservation, and site management.
The U.S. Government has provided over $100 million since 1975 for the preservation and restoration of antiquities in Old Cairo, Luxor, Alexandria, and Red Sea sites.  These treasures are not only a part of Egypt’s cultural heritage, but also its economy.  USAID has funded more than 70 conservation and training projects and employed thousands of Egyptians to ensure that knowledgeable and skilled workers are protecting these historical masterpieces for generations to come.

Psamtik I is found, 26th Dynasty discovery in Delta