Share
Facebook Twitter LinkedIn Tumblr Pinterest Reddit WhatsApp Telegram Viber Share via Email
After many speculations of the owner of the colossus, The discovered colossus belongs to Psamtik I of 26th Dynasty.
It was thought it would belong to Ramses II as it was unearthed from the site of the temple of Ramses II in Mataria. 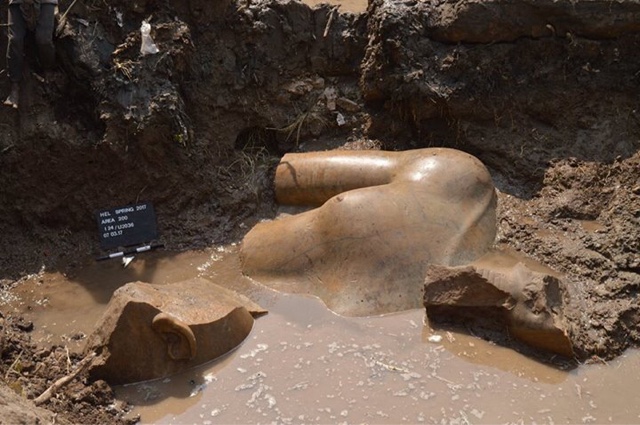 The Ministry of Antiquities tonight announced the probable identity of the royal colossus discovered last week in Matariya, Cairo (ancient Heliopolis).
Few Hieroglyphic signed and initial studies carried out on fragments of the colossus reveal that it belongs to king Psamtik I (664-610 BC) of 26th Dynasty.
The torso’s back-pillar has preserved one of the five names of king Psammetich I.  If it belongs to the later, it is the largest statue of the Late Period that was ever discovered in Egypt. This date explains the puzzling features of different ancient stylistic details since the Late Period, which is known for its archaizing art.
The colossal statue is carved in quartzite brought from Al-Gebel Al-Ahmar, Cairo. It originally measured about 9m in height. The two fragments of the statue were discovered on Tuesday 7thMarch, under the water table, which made their location and extraction extremely difficult. The fragments were found adjacent to a heavily congested housing area, 2 to 3 meters beneath the water.
The excavation work was carried out by the Egyptian-German Mission, working in the Temple of Matariya since 2012. Both fragments were moved and successfully saved by a team of restorers from the Grand Egyptian Museum (GEM), the Egyptian Museum in Tahrir as well as Matariya Antiquities Inspectorate and skilled workmen from Qift.
Both parts and a collection of recently discovered artifacts in Matariya were transported to the Egyptian Museum in Tahrir for restoration and temporary exhibition until its final location at the GEM, scheduled to be partially opened by Mid-2018. The transportation to the Egyptian Museum in Tahrir was carried out today in collaboration with the Transportation Department of Egypt’s Armed Forces. 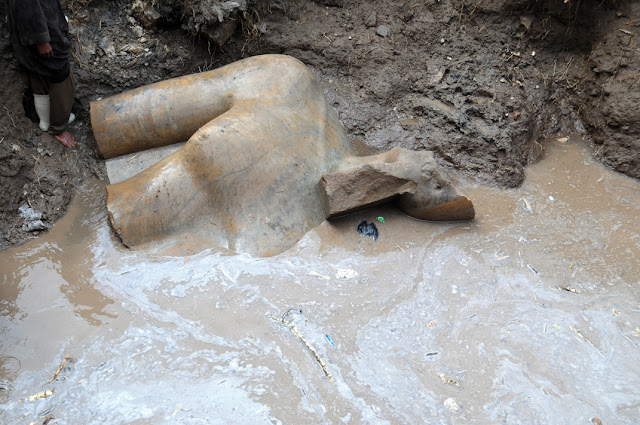 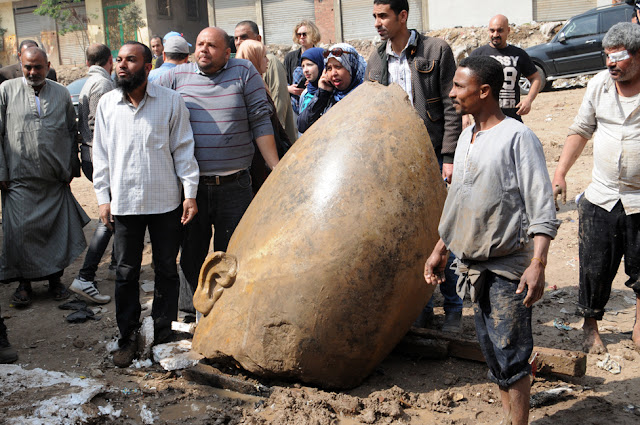 The artifact that is on show with the fragments of the royal colossus includes is a relief of King Ramses II. It features King Ramses II with an extended right arm, performing the ritual of anointing the representation of the cult-statue of a goddess. The goddess can be identified by other blocks from this area as Mut, “For most of the horns of the gods.” This relief was found in the remains of a second temple of King Ramses II.
The temple of Matariya is well known as one of the most important sites of pharaonic religion, since it was considered to be the place of the world`s creation by the sun-god. For about 2400 years, most kings erected their monuments in the temple.
Because of the vicinity to modern Cairo, the site was heavily destroyed in antiquity, from the Late Roman times onwards to the Mameluke era. The blocks of the temple were used to build various monuments in Cairo such as Bab el-Nasr and others.
It is therefore, especially noted that in this site there are still important monuments that can be found even today.
The Team of the marvelous work include Dr. Mahmoud Afiffi (Head of Ancient Egyptian Antiquities Sector), Dr. DietrischRaue (Head of the German mission), Dr. Ayman Ashmawi (Head of the Egyptian mission), Mr.EissaZidan (Director General of First Aid Conservation in GEM) and Dr. Moamen Othman (Head of Conservation Department at the Egyptian Museum)

The latest on the newly discovered colossus in Cairo.