Share
Facebook Twitter LinkedIn Tumblr Pinterest Reddit WhatsApp Telegram Viber Share via Email
Cairo University archaeological mission directed by Dr. Ola El Aguizy discovered a tomb of the Great Army General in the period of King Ramses II, which named “Iwrhya” in Sakkara.
Dr. Ola El Aguizy said that the discovery was carried out in the last excavation season 2017/2018, which resulted an important discovery in the New Kingdom necropolis south of the Causeway of King Unas in Saqqara.
She added “This tomb is probably dated to both the reigns of kings Seti I and Ramses II. It is still not fully excavated, yet it has already given us a lot of material testifying to the high status of its owner and his family.” 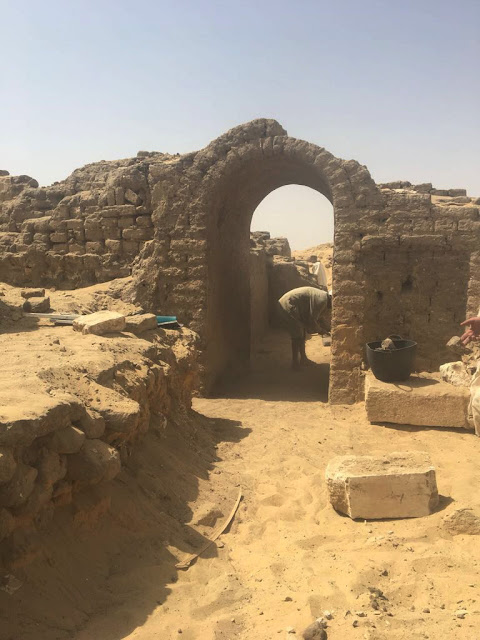 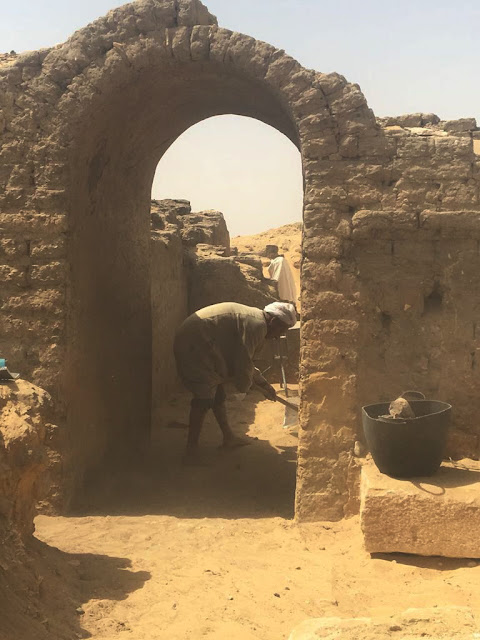 The owner of the tomb is a high army General, and High steward of the domain of Amun, High steward of the estates of Ramses II in the domain of Amun (the Ramesseum).
His name appears on the tomb together with that of his son “Yuppa” and his grand-son “Hatiay”; the latter occupying a very significant position in the inscriptions on the blocks found on the walls still in place. He had begun his military career during the reign of king Seti I and reached the highest positions in the Egyptian court during the reign of king Ramses II. 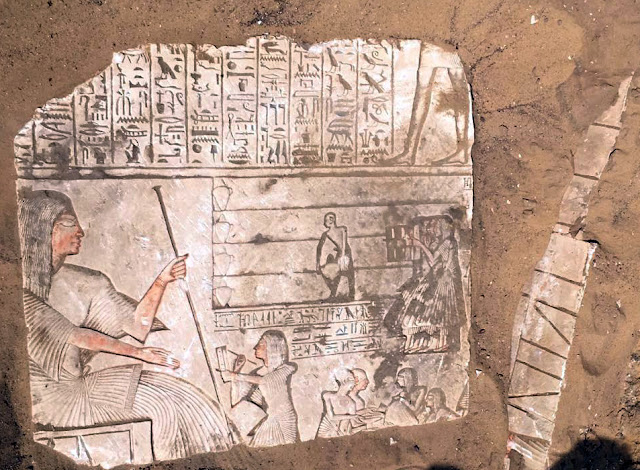 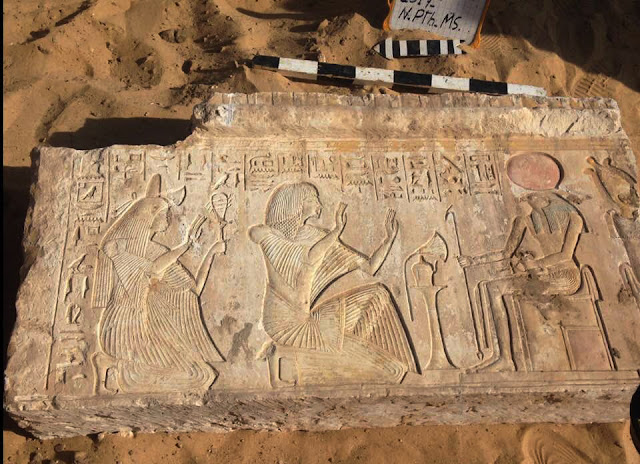 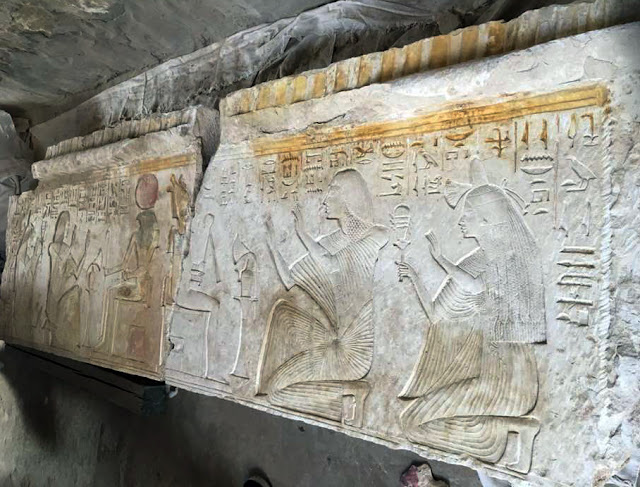 The fact that the names of many members of the family of Iwrhya: his son Yuppa and his grandson Hatiay are very prominent in the tomb might suggest that it might be a family tomb. This could not be surely attested except after the excavations of its sanctuary and its shaft.

Dr. El-Aguizy, pointed out that the tomb seems to follow the style of the contemporary tombs in the area: forecourt – statue room with adjacent plastered vaulted storehouses, peristyle court and western chapels which are still not excavated.
This high official from foreign origin was among the many foreigners who settled in Egypt and succeeded to reach high positions in the Egyptian society in the New Kingdom. 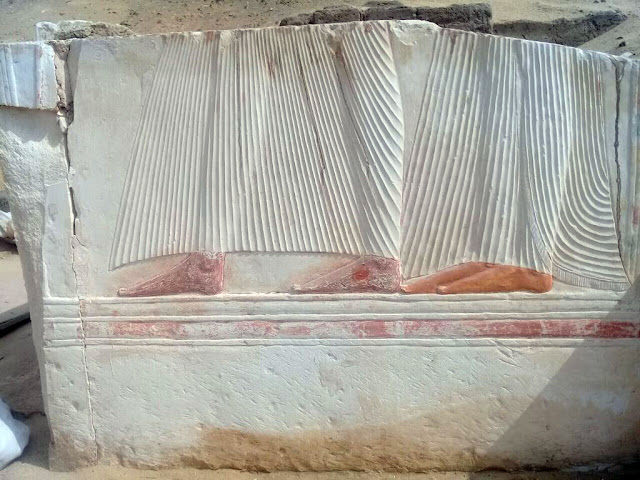 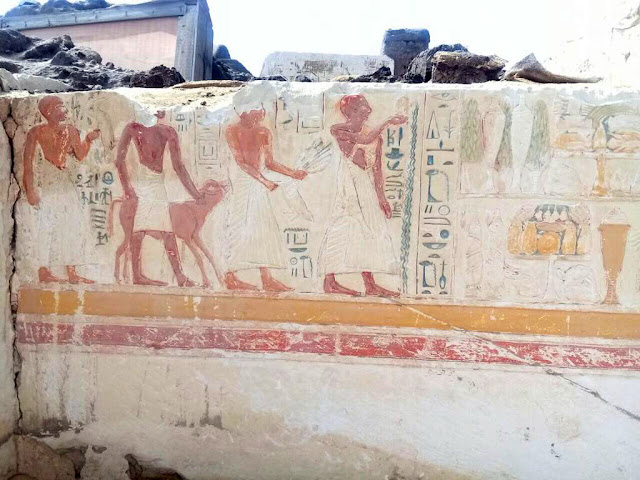 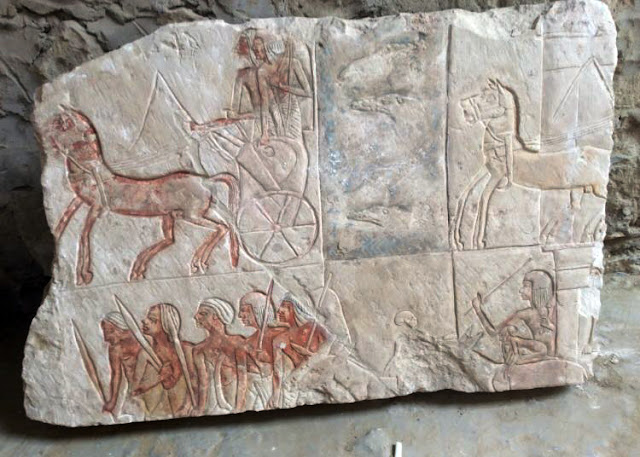 The scenes whether they are on the walls or on the blocks found buried in the sand which Dr. Ola El Aguizy, show the daily life activities

A block also discovered in the sand, probably detached from the northern wall shows quite an exceptional scene of an infantry unit and charioteers crossing a waterway with crocodiles. The preliminary study of this scene proved that it represents the eastern boarders of Egypt with its fortified walls.
The scene has only one parallel represented on the outer north wall of the hypostyle court of the Karnak temple in Thebes showing king Seti I returning from his victorious campaign against the Shasu Bedouins and entering Egypt through the same waterway with crocodiles. 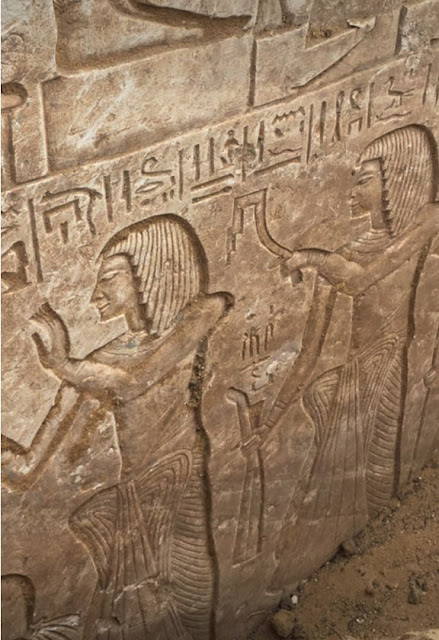 The remains of such fortified walls were discovered in the past few years by Dr. Mohamed Abdel Maqsoud and his team working on the site known as Tell Heboua I and II; on the Pelusian branch of the Nile, in Eastern Qantara.

The archaeological discoveries in this area (Qantara) has also proved that there was an active daily life in this garrison: Wine cellars, livestock the scenes on the walls

All the scenes of this tomb are quite exceptional, and its artistic features are very characteristic to the time of king Seti I and that of king Ramses II; a fact that proves that this tomb has been constructed over different phases.