Share
Facebook Twitter LinkedIn Tumblr Pinterest Reddit WhatsApp Telegram Viber Share via Email
High-level geophysics research provides conclusive evidence on the non-existence of hidden chambers adjacent to or inside Tutankhamun’s tomb (KV62).
Dr. Mostaf Waziri, Secretary General of the Supreme Council of Antiquities announced that the Head of the Italian scientific team Dr. Francesco Porcelli of the Polytechnic University of Turin is to provide all details of the Ground Penetrating Radar (GPR) studies and analysis during a speech he would deliver later today at the current Fourth Tutankhamun International Conference. 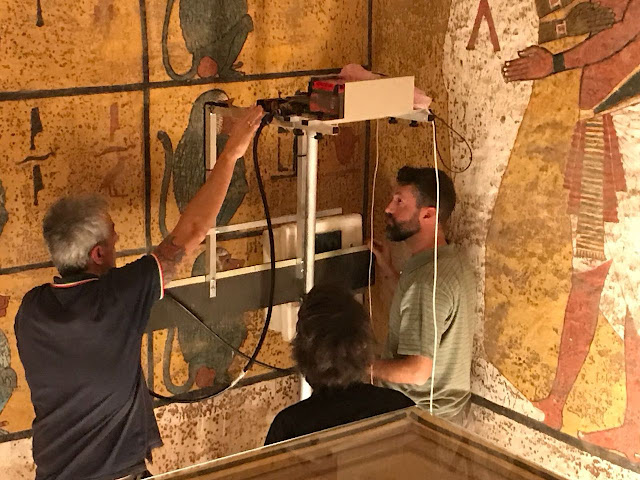 The team also include experts from the nearby University of Turin and from two private geophysics companies, Geostudi Astier (Leghorn) and 3DGeoimaging (Turin), who have completed the analysis of the GPR data collected from the inside of Tutankhamun’s tomb (code name KV62) last February 2018.
Dr. Waziri pointed out that Dr. Porcelli has submitted a scientific report to the Permanent Committee for Ancient Egyptian Antiquities at the Ministry of Antiquities with all the results of the GPR data analyses, revealing that the GPR scans were performed along vertical and horizontal directions with very dense spatial sampling. Double antenna polarizations where also employed, with transmitting and receiving dipoles both orthogonal and parallel to the scanning direction.
Dr. Porcelli asserted that the main findings are as follows: No marked discontinuities due to the passage from natural rock to man-made blocking walls are evidenced by the GPR radargrams, nor there is any evidence of the jambs or the lintel of a doorway. Similarly, the radargrams do not show any indication of plane reflectors, which could be interpreted as chamber walls or void areas behind the paintings of KV62 funerary chamber.
It is concluded, with a very high degree of confidence, said Dr. Porcelli, the hypothesis concerning the existence of hidden chambers or corridors adjacent to Tutankhamun’s tomb is not supported by the GPR data.
This is the third GPR survey to be conducted. It was designed to stop the controversy aroused after the contradictive results of two previous radar surveys carried out by a scientific Japanese and American teams, to inspect the accuracy of a theory launched in 2015 by British Egyptologist Nicholas Reeves who suggested the existence of queen Nefertiti’s tomb concealed behind the north and west wall paintings of king Tutankhamun’s burial chamber.
To solve the difficulties encountered by the two preceding surveys and provide a conclusive response, the Ministry of Antiquities in early 2016, decided to discuss the matter in the second International Tutankhamun Conference held in May 2016 and attended by a group of pioneer scholars, archaeologists and Egyptologists who on their turn asserted to conduct a third GPR systems with different technology to put an end to such debate.

Breaking News: Radar scan results are in for King Tut