Share
Facebook Twitter Google+ LinkedIn StumbleUpon Tumblr Pinterest Reddit WhatsApp Telegram Viber Share via Email
–>
Under the auspices of Farouk Hosni, the Minister of Culture, Dr. Zahi Hawass, Secretary General of the Supreme Council of Antiquities of Egypt, and Thomas P. Campbell, Director of The Metropolitan Museum of Art in New York, announced jointly today that, effective immediately, the Metropolitan Museum of Art would acknowledge Egypt’s title to 19 ancient Egyptian objects that have been in its collection since the early 20th century.  All of these small-scale objects, which range from study samples to a three-quarter-inch-high bronze dog and a sphinx bracelet-element, attributed to Tutankhamun’s tomb, which was discovered by Howard Carter in 1922 in the . The Museum initiated this formal acknowledgement after renewed, in-depth research by two of its curators substantiated the history of the objects.
“This is a wonderful gesture on the part of the Metropolitan Museum of Art,” said Hawass. “For many years the Museum, and especially the Egyptian Art department, has been a strong partner in our on-going efforts to repatriate illegally exported antiquities. Through their research, they have provided us with information that has helped us to recover a number of important objects, and last year, the Museum gave to a granite fragment that joins with a shrine on display in , so that this object could be restored. Thanks to the generosity and ethical behavior of the Met, these 19 objects from the tomb of Tutankhamun can now be reunited with the other treasures of the boy king.” Hawass continued that “The objects will now go on display with the “Tutankhamun” exhibition at Times Square, where they will stay until January, 2011. They will then travel back to the Metropolitan Museum of Art, where they will be shown for six months in the context of the ’s renowned Egyptian collection. Upon their return to in June 2011, they will be given a special place in the Tutankhamun galleries at the , , and then will move, with the rest of the Tut collection, to the at , scheduled to open in 2012.” 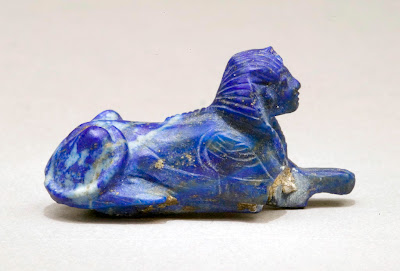 Bracelet inlay in the form of a sphinx made of lapis lazuli (Photo Metropolitan Museum of Art)
At the time that Howard Carter and his sponsor, the Earl of Carnarvon, discovered the tomb of pharaoh Tutankhamun (reigned ca. 1336-1327 B.C.), the Egyptian government generally allowed excavators to keep a substantial portion of the finds from excavations undertaken and financed by them.  However, during the decade that it took Carter and his team to recover the thousands of precious objects from this king’s tomb, it became increasingly clear that no such partition of finds would take place in the case of the Tutankamun tomb.
Owing to the splendor of the treasures discovered in the tomb, conjectures soon started nevertheless, suggesting that certain objects of high quality, dating roughly to the time of Tutankhamun and residing in various collections outside , actually originated from the king’s tomb.  Such conjectures intensified after the death of Howard Carter in 1939, when a number of fine objects were found to be part of his estate.  When the acquired some of these objects, however, the whole group had been subjected to careful scrutiny by experts and representatives of the Egyptian government; and subsequent research has found no evidence of such a provenance in the overwhelming majority of cases.  Likewise, thorough study of objects that entered the from the private collection of Lord Carnarvon in 1926 has not produced any evidence of the kind. 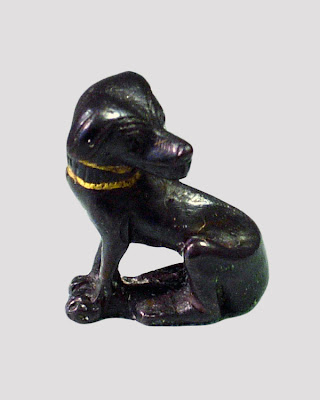 Figurine of a dog made of bronze with a gold collar (Photo Metropolitan Museum of Art)
The 19 objects now identified as indeed originating from the tomb of King Tutankahmun (see illustrated list attached) can be divided into two groups.  Fifteen of the 19 pieces have the status of bits or samples.  The remaining four are of more significant art-historical interest and include a small bronze dog less than three-quarters of an inch in height and a small sphinx bracelet-element, acquired from Howard Carter’s niece, after they had been probated with his estate; they were later recognized to have been noted in the tomb records although they do not appear in any excavation photographs.  Two other pieces—part of a handle and a broad collar accompanied by additional beads—entered the collection because they were found in 1939 among the contents of Carter’s house at Luxor; all of the contents of that house were bequeathed by Carter to the Metropolitan Museum.  Although there was discussion between Harry Burton (a Museum photographer based in Egypt, the Museum’s last representative in Egypt before World War II broke out, and one of Carter’s two executors) and Herbert Winlock about the origins of these works and about making arrangements for Burton to discuss with a representative of the Egyptian Museum in Cairo whether these works should be handed over to Egypt, that discussion was not resolved before Burton’s death in 1940.  When the ’s expedition house in was closed in 1948, the pieces were sent to . 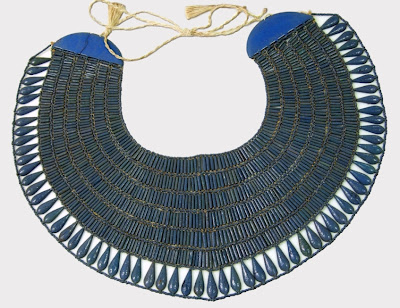