Dr. Mohamed Ibrahim, Minister State of Antiquities, announced the discovery of a cemetery dated back to the Third Intermediate Period (1075 – 664 B.C) inside the mortuary temple of Amenhotep II (XVIII Dynasty 1550-1291 B.C) which is located north of the Ramesseum temple on the west bank of Luxor. 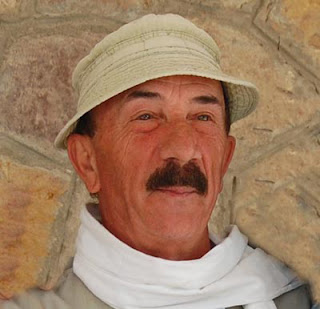 Dr. Angelo Sesana
Five tombs were unearthed last week by the mission of CEFB (Centro di Egittologia Francesco Ballerini) headed by Dr. Angelo Sesana during their excavation work in the temple. The Italian mission has found a number of stone tombs. Each tomb has a shaft leads to a burial chamber where the remains of wooden sarcophagus bears funerary scenes in black and red, also skeleton’s remains were found alongside funerary furniture. 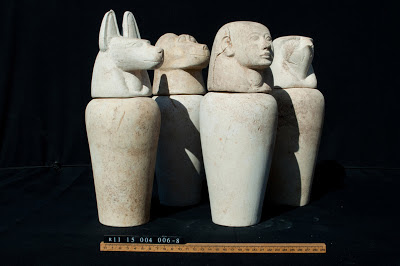 Mansour Boraik, The head of Upper Egypt antiquities, said that 12 canopic jars were found, some of limestone and the rest are burnt clay which were transferred to the antiquities warehouse in Luxor for restoration before displaying them in museums.
Mansour Boraik explained that this discovery reflects the religious importance of Amenhotep II temple, He also refereed that Amenhotep II tomb in the Valley of the Kings had a group of royal mummies which is known as Luxor Cachette. 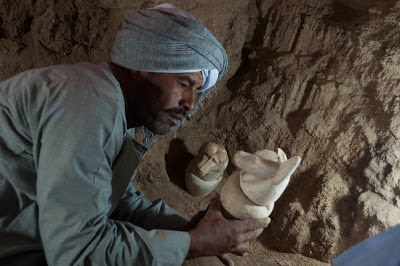 From the CEFB site on 7th of January 2013, (Translated from Italian)
“Last year we had stopped the excavation in the field F23, after the discovery of a tomb intended for two young women, we have found yet carefully composed in their sarcophagi. This year we revealed a niche closed by a brick wall that opened on the corner of the burial chamber. To our surprise, we could already see a wall of red colour that turns out to be in terracotta.
With our workers we carefully opened a corner of what appears to be just a small sarcophagus! The cover is unfortunately broken in several pieces and we fear that this is the work of the ancient looters. But for once we’re lucky! And after a careful cleaning, we see inside the small objects deposited as a kit: everything needed for the journey in Afterlife for a child of about six months.
The location where the body lay carefully composed, leads us to suppose that originally could have been mummified. There is perhaps normal to see a relation between the two young women discovered last year and the small body. And as we reflect on their past lives, our workers carry the little coffin on their shoulders proposing to us the image of a distant funeral.”
The CEFB mission site with more copyrighted pictures. Click Here
Share
Facebook Twitter Google+ LinkedIn StumbleUpon Tumblr Pinterest Reddit WhatsApp Telegram Viber Share via Email Print